Download logo By Huawei advertorial As mobile devices increase in popularity, individuals are embracing digital transformation more rapidly than most enterprises. People are changing their habits, looking for new ways handling financial transactions, such as investing in stocks and managing portfolios. However, financial services are not as common in some […]

As mobile devices increase in popularity, individuals are embracing digital transformation more rapidly than most enterprises.

People are changing their habits, looking for new ways handling financial transactions, such as investing in stocks and managing portfolios.

However, financial services are not as common in some developing countries. In Ghana, for instance, many are ‘unbanked’, meaning they don’t have any proper bank account and are simply excluded from the financial system.

The Bank of Ghana estimates that some seven million people are unbanked, representing 22 per cent of the country’s population.

But while these people may not have access to appropriate financial services, but many of them have access to the internet, with online penetration in Ghana standing at around 64 per cent.

The country also has the highest mobile penetration in West Africa and already outperforms many of its regional peers. By the end of 2019, mobile adoption stood at 55 per cent, higher than the regional average of 44.8 per cent.

Measures include renewing regulations under the guidance of the World Bank to allow non-financial enterprise to provide such services.

Ghana Commercial Bank (GCB) took the initiative to implement its strategy in 2018 using Huawei’s G-Money solution, in a move to stay ahead in the increasing fierce competition among banks and telecom carriers.

Mobile money is a bank business

The solution is an extension of a successful scheme in China, where mobile payment has become a key driver that brings banks to take a more proactive position in providing new services.

While developing various solutions to fit their customers, these lenders share the same ideology: mobile money services should be a bank business.

This is also reflected by GCB. As the country’s largest commercial bank, it looked to develop a mobile money platform that could be used for easy cross-platform payments, with a broader range of services – building a mobile payment ecosystem to give more flexibility to customers.

The lender, which has served for more than six decades and already had 200 branches, was committing to include more agents and merchants in its mobile money network to make it reachable by more people. It also upgraded point of service terminals and ATMs, making them capable of supporting mobile money services.

The updated G-Money mobile money platform was launched in December 2019, which has since helped GCB to expand its mobile services. The bank gained 60,000 new customers in a single month after the launch, representing a 900 per cent growth. By April this year, GCB had more than 700,000 mobile money users.

On the technology front, Huawei built G-Money with an open cloud and micro-service architecture, which allows elastic scaling and continuous optimisation of service processes, ultimately laying a solid foundation for the digital transformation of all banking services.

The strategy continues to expand with several initiatives, with mobile wallet as a pivot. The G-Money platform gives GCB a better competitive edge against network carriers in Ghana, while also facilitating interbank settlements through the Ghana’s central bank as it connects to all banks in the country.

The next stage will be a QR code-based mobile payment system, along with smart operations. By using open Application Programming Interfaces (APIs) ,the platform can support pre-sales and after-sales for local merchants, allowing service providers from different industries to take part in an ecosystem.

Financial inclusiveness as the ultimate goal

Banks can now offer more products and services – ranging from overdrafts and small loans, to insurance and more – to customers via mobile finance. Ultimately, more people will be properly included in the financial system with adequate protections.

Financial inclusiveness is a goal for Huawei, as its mobile money solutions have been commercially deployed in 19 countries, serving over 206 million users – accounting for 22 per cent of registered mobile money accounts in emerging markets.

Distributed by APO Group on behalf of Huawei.

How to Make Business Cards on a Mac Computer | Small Business

Thu Oct 15 , 2020
From seasoned business owners to new entrepreneurs, every company head needs business cards for herself and her employees. You can set up identity materials for your firm with a do-it-yourself approach that relies on your Mac computers and familiar software resources ranging from office software suites to design applications. Tailor […] 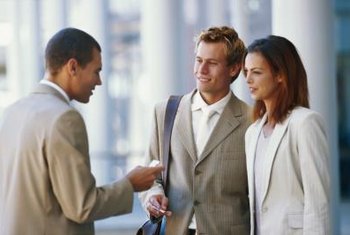